What Are the Most Common OSHA Citations?

The Occupational Safety and Health Administration (OSHA) mandates most U.S. public and private employer health and safety regulations with outreach to numerous industries. As part of OSHA’s enforcement duties, violation of these regulations often results in employer citations and subsequent fines. So, just what are the most commonly cited workplace violations? Well, OSHA’s annual Top 10 list is a good place to start.

Each year, OSHA publishes their Top 10 Most Frequently Cited Standards list for the previous fiscal year. As you may guess, the usual violation suspects remain mostly unchanged from year to year, with a seemingly even split between General Industry and Construction standard violations. For the fiscal year 2020, and out of approximately 22,000 OSHA workplace inspections, mostly via programmed and unprogrammed, fatality/catastrophe, complaints and referrals inspections, here are the list of top 10 most cited workplace violations:

Year after year, falls are the number one cause of fatalities in construction, and once again, this sadly remains in the number one spot of most cited violations. Far and away, the vast majority of citations stemmed from lack of fall protection systems for workers exposed to a fall distance of six feet or more to a lower surface engaged in residential construction. Although much has been done in the way of training such as national emphasis, improved equipment selection, and workplace outreach, far more needs to be accomplished.

Worker exposure to dangerous chemicals continues to be problematic, and this violation is unchanged in its ranking from 2019. Common violations encompass training, labeling, and safety data sheets (SDS). The most common violations are due to employer failure to develop, implement, and maintain a workplace hazard communication program. FYI OSHA is actively working to update this standard in the near future. 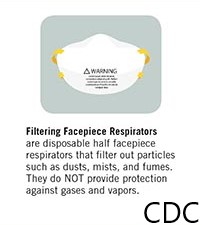 Notably making it into the top three from last year’s ranking of number five, one must logically ask if the COVID-19 pandemic perhaps had an impact on this violation jump. Employers should take note that the majority of these violations stemmed from lack of an employer respiratory protection program, which encompasses elements such as medical evaluations, written procedures, fit testing, training, and equipment selection.

Another popular construction violation area, falling into the number four position from last year’s rank of number three. The majority of violations cited stemmed from lack of fall protection for employees on scaffolding more than ten feet above a lower level. Other violations included misuse of ladders for access, insufficient planking and guardrail systems, and improper erection of scaffold systems.

Like scaffolding, ladders are another construction violation area falling into the number five position from last year’s rank of number six. Scaffold and ladder system violations are easy pickings, mainly due to their widespread use and high visibility. As evidence of this, the overwhelming majority of ladder violations stemmed from basic set up and securement of portable ladders, such as the ladder side rails not extending at least three feet above the upper landing surface.

Control of Hazardous Energy, or COHE, comes in at number six, falling two spots from number four in 2019. Although electricity is high on the list of commonly encountered hazardous energies, employers should not jump to the conclusion that this is an electrical safety only violation. The use of lockout/tagout, or LOTO, can apply to a variety of hazardous energies, such as steam and hydraulic pressure. The majority of violations cited in this category are procedure related, such as training, communication, and inspection.

Unchanged from its 2019 seventh position ranking, powered industrial trucks, or PIT, commonly referred to as fork trucks or forklifts, present a variety of hazards for both operators of the equipment and non-operators working in proximity of the operating equipment. Although most citations were issued for unsafe operation, many other violations applied to employer certification and evaluation, training, inspections, maintenance, and repair.

Another unchanged ranking from 2019, and as taken from the construction standard, training violations are commonly cited whenever worksite fall protection issues are present. The overwhelming majority of citations issued indicated employer failure to provide a fall protection program for those employees exposed to falls. Programs needs to include certified training and re-training for employee fall hazard recognition and control, conducted by a competent person.

In at number nine from number 10 last year, violations and subsequent employer citations frequently target the lack or unsafe use of personal protective equipment, or PPE, especially in a construction environment. The vast majority of these PPE citations are issued for lack of eye and face protection. Employees exposed to eye and face hazards, such as flying particles and debris, chemicals, and light radiation, commonly disregard the requirements to don proper PPE such as glasses, goggles, and face shields. Citations also indicate there is still misconception or ignorance that non-safety prescription eyewear alone is acceptable eye protection.

Rounding out the last position from its 2019 ninth ranking is machinery and machine guarding. Amputations, lacerations, crushing hazards, and injuries from flying debris can all stem from lack of or improper machinery/machine guarding. The vast majority of citations issued to employers were for lack of general machine guarding applications such as barrier guards, two-hand tripping devices, and electronic safety devices. There were also notable citations issued for point of operation guarding failures and improper anchoring for fixed machinery resulting in the equipment walking or moving.

What are the Different Types of Respirators?