The degree to which a worker's body has physiologically adjusted or acclimatized to working under hot conditions affects his or her ability to do work. Acclimatized individuals generally have lower heart rates and body temperatures than unacclimatized individuals, and sweat sooner and more profusely. This enables them to maintain lower skin and body temperatures at a given level of environmental heat and work loads than unacclimatized workers. Sweat composition also becomes more dilute with acclimatization, which reduces salt loss. Acclimatization can occur after just a few days of exposure to a hot environment. 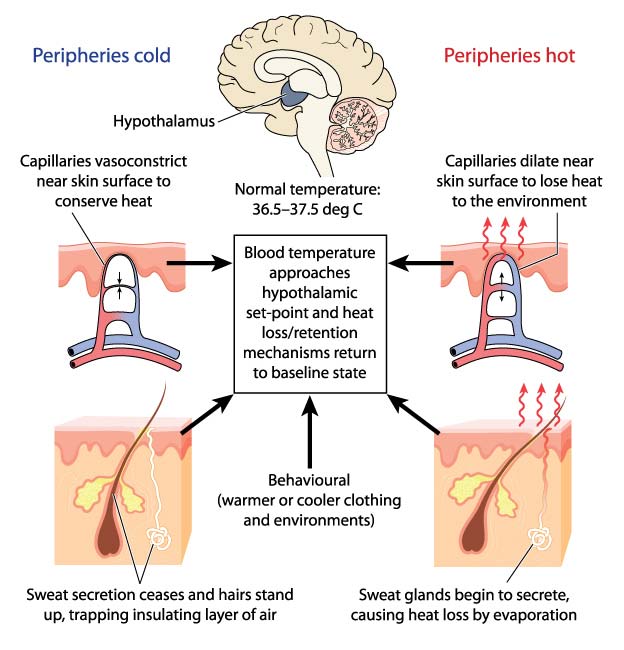 NIOSH recommends a progressive 6-day acclimatization period for the unacclimatized worker before allowing him/her to do full work on a hot job. Under this regimen, the first day of work on siteis begun using only 50 percent of the anticipated workload and exposure time, and 10 percent is added each day through day 6. With fit or trained individuals, the acclimatization period may be shortened 2 or 3 days. However, workers can lose acclimatization in a matter of days, and work regimens should be adjusted to account for this. HAZWOPER Technicians when enclosed in an impermeable suit, fit acclimatized individuals sweat more profusely than unfit or unacclimatized individuals and may therefore actually face a greater danger of heat exhaustion due to rapid dehydration. This can be prevented by consuming adequate quantities of water. Generally, maximum work capacity declines with increasing age, but this is not always the case. Active, well-conditioned seniors often have performance capabilities equal to or greater than young sedentary individuals.

However, there is some evidence, indicated by lower sweat rates and higher body core temperatures, that older individuals are less effective in compensating for a given level of environmental heat and work loads. At moderate thermal loads, however, the physiological responses of "young" and "old" are similar and performance is not affected. Age should not be the sole criterion for judging whether or not an individual should be subjected to moderate heat stress. Fitness level is a more important factor. Literature indicates that females tolerate heat stress at least as well as their male counterparts. Generally, a female's work capacity averages 10 to 30 percent less than that of a male. The primary reasons for this are the greater oxygen-carrying capacity and the stronger heart in the male. However, a similar situation exists as with aging: not all males have greater work capacities than all females. The ability of a body to dissipate heat depends on the ratio of its surface area to its mass (surface area/weight). Heat loss (dissipation) is a function of surface area and heat production is dependent on mass. Therefore, heat balance is described by the ratio of the two. Since overweight individuals (those with a low ratio) produce more heat per unit of surface area than thin individuals (those with a high ratio), overweight individuals should be given special consideration in heat stress situations. However, when wearing impermeable clothing, the weight of an individual is not a critical factor in determining the ability to dissipate excess heat.