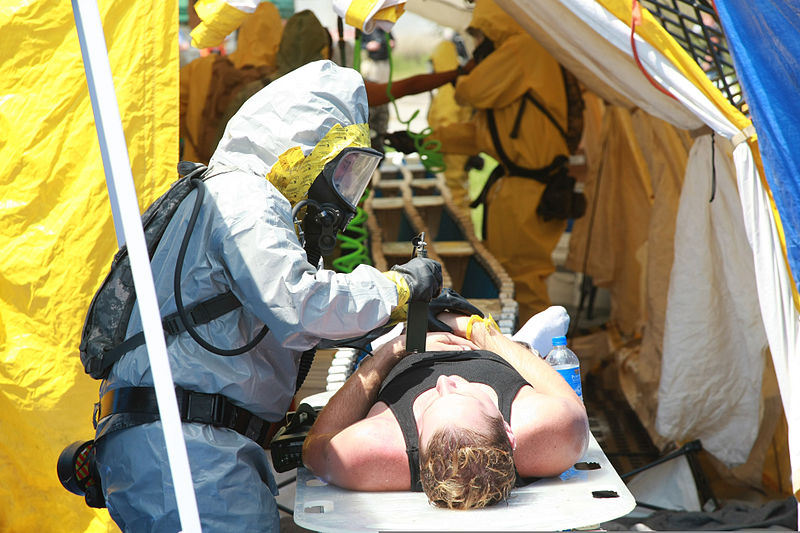 HAZWOPER Incident Commanders for hospitals were identified by hospital organizations as having given notable consideration to the possibility of receiving contaminated victims from a mass casualty incident involving hazardous substance release. Hospitals interviewed were selected to represent a range of circumstances, loosely based on location (U.S. region) and the hospital’s relative probability (risk) of receiving contaminated victims of a mass casualty incident.

This risk was estimated using a scale adapted from the Hospital Corporation of America (HCA, undated):

• Minimum Risk Hospitals – Hospitals with populations less than 500,000 within a 50-mile radius and without a high-visibility potential target within that distance. (Hospital F)* Note: This risk scale was used only to help identify a diverse group of hospitals for interviews. Other scales might have been used and OSHA does not promote this or any other scheme. *To maintain a minimum level of confidentiality, hospitals were assigned letters according to risk category, which do not reflect the alphabetical order in which they are listed above.

Healthcare workers risk occupational exposures to chemical, biological, or radiological materials when a hospital receives contaminated patients, particularly during mass casualty incidents. These hospital employees, who may be termed first receivers, work at a site remote from the location where the hazardous substance release occurred.1 This means that their exposures are limited to the substances transported to the hospital on victims’ skin, hair, clothing, or personal effects (Horton et al., 2003). The location and limited source of contaminant distinguishes first receivers from other first responders (e.g., firefighters, law enforcement, and ambulance service personnel), who typically respond to the incident site (i.e., the Release Zone).

HAZWOPER Incident Commanders must protect their employees, hospitals benefit from information to assist them in emergency planning for incidents involving hazardous substances (BNA, 2003; Barbera and Macintyre, 2003). Emergency first responders, at the site of the release, are covered under OSHA’s Standard on Hazardous Waste Operations and Emergency Response (HAZWOPER), or the parallel OSHA-approved State Plan standards, and depending on their roles, some hospital employees also are covered by the standard. However, OSHA recognizes that first receivers have somewhat different training and personal protective equipment (PPE) needs than workers in the hazardous substance Release Zone, a point clarified through letters of interpretation (OSHA, 2002a).

In this best practices document, OSHA provides practical information to help hospitals address employee protection and training as part of emergency planning for mass casualty incidents involving hazardous substances. OSHA considers sound planning the first line of defense in all types of emergencies (including emergencies involving chemical, biological, or radiological substances). By tailoring emergency plans to reflect the reasonably predictable “worst-case” scenario under which first receivers might work, the hospital can rely on these plans to guide decisions regarding personnel training and PPE (OSHA, 2003, 2002b, 1999). The Joint Commission on Accreditation of Healthcare Organizations (JCAHO) requires an all-hazard approach to allow organizations to be flexible enough to respond to emergencies of all types, whether natural or manmade (unintentional or intentional). Worst-case scenarios take into account challenges associated with communication, resources, and victims. During mass casualty emergencies, hospitals can anticipate little or no warning before victims begin arriving.5 Additionally, first receivers can anticipate that information regarding the hazardous agent(s) would not be available immediately. Hospitals also can anticipate a large number of self-referred victims (as many as 80 percent of the total number of victims) and assume victims will not have been decontaminated prior to arriving at the hospital (Auf der Heide, 2002; Barbera and Macintyre, 2003; Vogt, 2002; Okumura et al., 1996).