Supplied-air respirators (also known as air-line respirators) supply air, never oxygen, to a facepiece via a supply line from a stationary source. SARs are available in positive-pressure and negative-pressure modes. Pressure-demand SARs with escape provisions provide the highest level of protection (among SARs) and are the only SARs recommended for use at hazardous waste sites. SARs are not recommended for entry into IDLH atmospheres (MSHA/NIOSH 30 CFR Part 11) unless the apparatus is equipped with an escape Self-Contained Breathing Apparatus (SCBA). 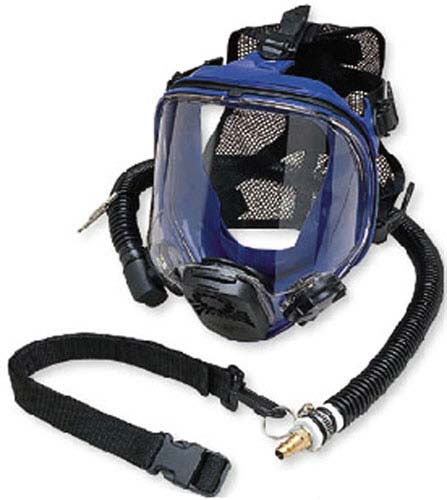 The air source for supplied-air respirators may be compressed air cylinders or a compressor that purifies and delivers ambient air to the facepiece. SARs suitable for use with compressed air are classified as "Type C" supplied-air respirators as defined in MSHA/NIOSH 30 CFR Part 11. All HAZMAT SAR couplings must be incompatible with the outlets of other gas systems used on site to prevent a worker from connecting to an inappropriate compressed gas source (OSHA 29 CFR 1910.134(d)). SARs enable longer work periods than do SCBAs and are less bulky. However, the air line impairs worker mobility and requires workers to retrace their steps when leaving the area. Also, the air line is vulnerable to puncture from rough or sharp surfaces, chemical permeation, damage from contact with heavy equipment, and obstruction from failing drums, etc. To the extent possible, all such hazards should be removed prior to use. When in use, air lines should be kept as short as possible (300 feet [91 meters] is the longest approved hose length for SARs), and other workers and vehicles should be kept away from the air line. The use of air compressors as the air source for an SAR at a hazardous waste site is severely limited by the same concern that requires workers to wear respirators: that is, the questionable quality of the ambient air. Onsite compressor use is limited by OSHA standards (29 CFR Part 1910.134[d]).

Key questions to ask when considering HAZMAT SAR use are:

• Is the atmosphere IDLH or likely to become IDLH? If yes, an SAR/SCBA combination or SCBA should be used.

• Will the hose significantly impair worker mobility? If yes, the work task should be modified or other respiratory protection should be used.

• Is there a danger of the air line being damaged or obstructed (e.g., by heavy equipment, failing drums, rough terrain, or sharp objects) or permeated and/or degraded by chemicals (e.g., by pools of chemicals)? If yes, either the hazard should be removed or another form of respiratory protection should be used.

• Can other workers and vehicles that might interfere with the air line be kept away from the area? If no, another form of respiratory protection should be used.