A critical element of emergency response planning is the implementation of an Incident Command System (ICS), further outlined in paragraph 1910.120(q)(3)(i). The ICS is an organized approach to effectively control and manage operations at an emergency incident. 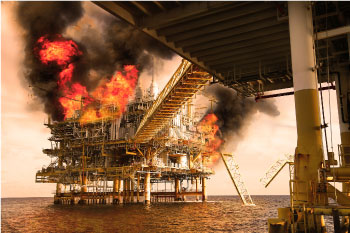 For example, an emergency response involving hazardous substances may include a fire condition. Anyone who has ever served as a firefighter knows that responding to a fire requires strategic training, planning, communication and coordination of personnel and equipment, implemented through a specific chain of command. The ICS is not much different than the "command post" approach used for many years by the fire service. During large complex fires involving several companies and many pieces of apparatus, a command post is established. This enables one individual to be in charge of managing the incident, rather than having several officers from different companies making separate, and sometimes conflicting, decisions. The individual in charge of the command post would delegate responsibility for performing various tasks to subordinate officers. Additionally, all communications are routed through the command post to reduce the number of radio transmissions and eliminate confusion. Strategy, tactics, and all decisions are made by one individual. The ICS is a very similar system, except it is implemented for emergency response to all incidents, both large and small, that involve hazardous substances.

Specialist employees authorized and appointed for ICS operations each require specific training and include:

Depending on the overall size and scope of the incident, the number of these specialist employees will vary. And often, these roles can change as needed and delegated by the individual in charge of the ICS. As we all know, emergency incidents do not always have the same outcome, but rather follow and unfold in a minute by minute, hour by hour pattern. A small controllable incident can easily become an out-of-control, larger incident due to an explosion, hazardous chemical release, and casualty exposures of employees and general public.

Any emergency responder acting as an incident commander should be trained to fulfill the obligations of the position at the level of response they will be providing, as outlined in section 1910.120(q)(6)(v):

To learn more about assuming an incident command role within a HAZMAT team, check out NET's 8-Hour Incident Command course.

How to Refresh and Renew Your HAZWOPER Training